Half Year Financials For the period ended 31 December 2019 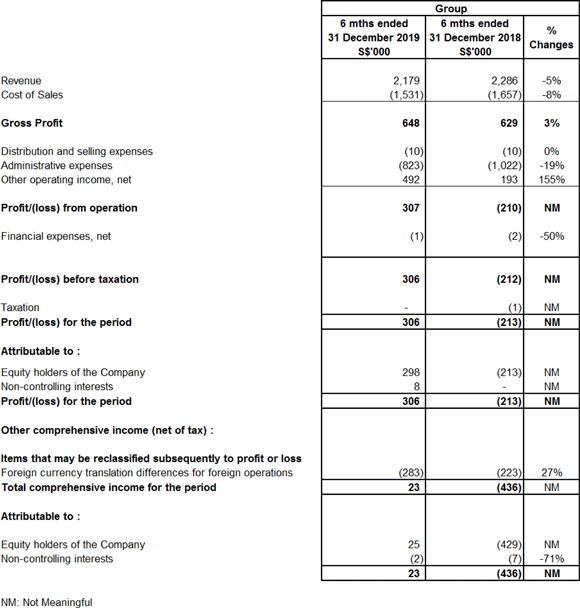 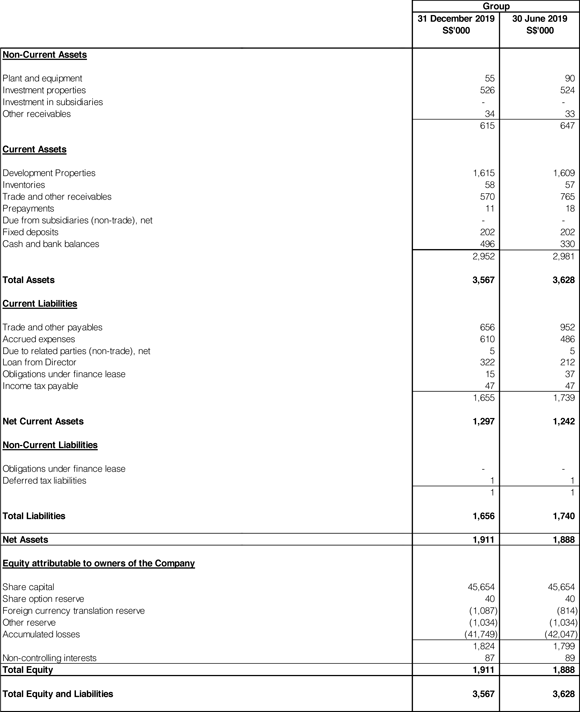 Revenue had decreased from S$2.29 million to S$2.18 million. The decrease in revenue was mainly due to lower revenue generated from trading related business by the Singapore subsidiary.

The Group's profit margin had increased from 28% to 30% mainly due to NGV related business.

Profit/(loss) for the Period

The Group had a profit of S$0.31 million for the current financial period as compared to a loss of S$0.21 million for the previous financial period, mainly due to higher gross profit of S$0.02 million, decrease in administrative expenses of S$0.20 million and increase in other operating income of S$0.30 million mainly due to waiver of director remuneration.

The Group's current liabilities decreased from S$1.74 million as at 30 June 2019 to S$1.66 million as at 31 December 2019. The decrease was mainly due to trade and other payables, offset by an increase in accrued expenses.

The Group's cash and cash equivalents as at 31 December 2019 increased by S$0.17 million to S$0.50 million as compared to the balance of S$0.33 million as at 30 June 2019. The increase was mainly due to net cash generated from operating and financing activities.

Management expects the operating business environment in the next 12 months to remain challenging, due to pricing pressure from customers and rising operational costs. However, management remains focused to enhance its operational efficiency and monitor its operating expenses in the face of economic uncertainties, to enhance the profitability of the Group's existing businesses.

Management remains cautious of unexpected economic upheavals in the global economy which may adversely affect the Company and will continue to focus on its existing business, without any major capital expenditures.

Management expects the property development environment to be challenging due to stricter regulatory control of loans from the banks. However, management will expand the new business segment, if opportunity arises.

Please read our General Disclaimer & Warning carefully. Use of this Website constitutes acceptance of the Terms of Website Use.
Copyright © 2020. ListedCompany.com. All Rights Reserved.
Valid HTMLValid CSS